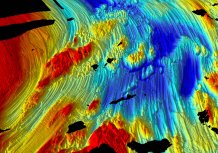 A University of Exeter academic is part of an international team of experts working to discover how quickly a massive Antarctic glacier could collapse.

The loss of the Thwaites Glacier in West Antarctica could significantly affect global sea levels. It already drains an area roughly the size of Britain or the US state of Florida, accounting for around four per cent of global sea-level rise —an amount that has doubled since the mid-1990s.

Dr Alastair Graham will spend time in the region analysing how and why the glacier has altered in the past. His work will shed light on changes likely to happen in the future.

The five-year study, which starts in early 2019, is part of a new £20 million research collaboration announced by the UK Natural Environment Research Council and the US National Science Foundation to gather the data needed to understand whether the glacier’s collapse could begin in the next few decades or centuries.

Dr Graham will examine the sea bed shape and the sediments found offshore of the glacier. This will give information about its life in the decades, centuries, and possibly millennia  before satellites were able to track it.

“By looking at layers of mud and sediment laid down through the years by the glacier – which also contain microfossils and shells- we will be able to get a picture back through the years of changes in ocean temperature as well as  the size and state of the glacier,” Dr Graham said.

“Today, the glacier is being eroded away by warm ocean water that flows up to and under the glacier’s floating face. We know this flow of ocean water can change from year to year at the moment. Our work will allow us to see if the extreme changes we are witnessing in the ice sheet right now were triggered by similar variations in ocean conditions that may have occurred hundreds of years ago .”

Dr Graham and other researchers on the study, who are from the British Antarctic Survey and universities in Houston, Alabama and New York, will also use sonar to map how deep the ocean floor is around the glacier edge. This will allow them to trace where warmer waters access the glacier base, and show where the edge of the glacier was in the past, as it leaves a “footprint”  in the features of the landscape on the submerged sea bed. This “footprint” may also give important clues to the researchers about the processes involved in the collapse of large glaciers, such as Thwaites.

This study is one of eight funded by the NERC and NSF that will bring together leading polar scientists in one of the most inhospitable regions of the planet.  The programme, called the International Thwaites Glacier Collaboration (ITGC), is the largest joint project undertaken by the two nations in Antarctica for more than 70 years - since the conclusion of a mapping project on the Antarctic Peninsula in the late 1940s.

The collaboration involves around 100 scientists from world-leading research institutes in both countries alongside researchers from South Korea, Germany, Sweden, New Zealand and Finland, who will contribute to the various projects. These projects aim to deliver answers to some of the big questions for scientists trying to predict global sea-level rise.

UK Science Minister, Sam Gyimah, said: “Rising sea levels are a globally important issue which cannot be tackled by one country alone. The Thwaites Glacier already contributes to rising sea levels and understanding its likely collapse in the coming century is vitally important.  Science, research and innovation is at the heart of our Industrial Strategy and this UK-U.S. research programme will be the biggest field campaign of its type ever mounted by these countries. I’m delighted that our world leading scientists will help lead this work.”