Portus Pisanus was replaced by the maritime harbour of Livorno (photo: Robert Pittman)

New insights into the evolution and eventual disappearance of Portus Pisanus, the lost harbour of Pisa, have been revealed.

Although it has been described as one of Italy’s most influential seaports during the Middle Ages, little is known about the relationship between Portus Pisanus’s environment and its history.

To understand the role that long-term coastal dynamics, sea-level rise and a changing environment played in the harbour’s evolution, researchers reconstructed relative sea levels for the eastern Ligurian Sea over a 10,500-year period.

The research team, led by David Kaniewski, also coupled historical maps with geological data to reconstruct the morphology of the coast around the Pisa harbour basin.

They analysed biological samples from sediment layers to investigate how seawater, freshwater or agricultural activities may have influenced the environment in the area, before comparing and contrasting their data with written sources and archaeological data.

The findings suggest that at approximately 200 BC, a naturally protected lagoon with a good connection to the sea developed south of the city of Pisa that would have benefited navigation and trade and facilitated the establishment of port complexes.

The lagoon hosted Portus Pisanus well beyond the 5th century AD but its degree of sea connection began to decline from around 1000-1250 AD, as coastlines shifted towards the sea. 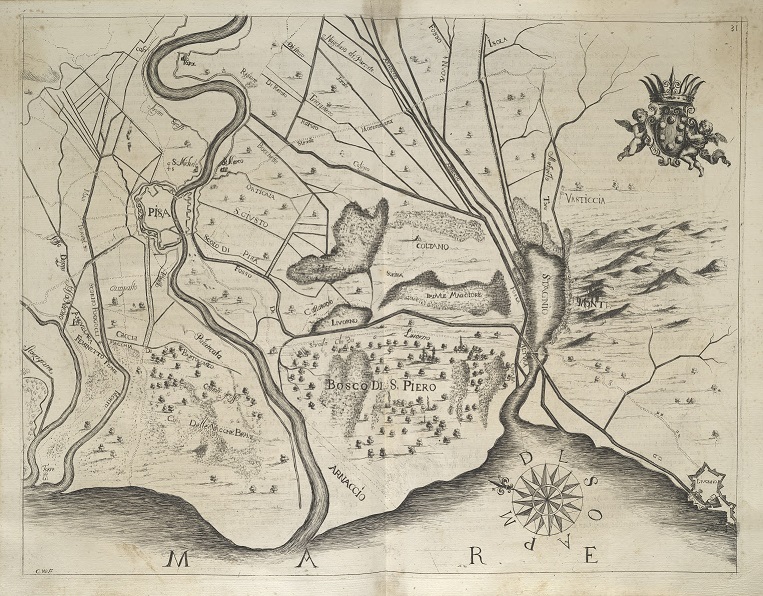 Map of Pisa and the mouth of the Arno (source: Cornelis Meyer, 1685)

It was cut off from the sea and disappeared around 1500 AD when the basin developed into a coastal lake and Portus Pisanus was replaced by the maritime harbour of Livorno.

“This paper is the result of a very intense collaboration between geo-scientists and archaeologists in the Mediterranean Sea,” said Dr Matteo Vacchi, from the University of Exeter.

“Our results underline the importance of such approaches to understand the role of long-term coastal changes and their impacts on the societies living by the sea, notably in the last two millennia.

“The study of the evolution in the coastal zone in the past is a fundamental tool to predict future changes in the context of climatic change.

“Thanks to the huge amount of archaeological remains, the Mediterranean Sea offers the unique possibility to understand the ability of past societies to respond to such major coastal changes.

“I am working with colleagues on similar studies in other Mediterranean coastal areas, including Corsica and Sardinia.

“These Islands, placed in the middle of the Western Mediterranean, have a huge potential for this kind of investigations and represents a major focus of my current research activity.”

The paper, published in the journal Scientific Reports, is entitled: “Holocene evolution of Portus Pisanus, the lost harbour of Pisa”.