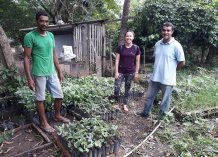 Thousands of trees have been planted in former rainforest land in the Amazon, nourishing the soil and providing impoverished Brazilians with food and increased incomes.

The land – in the Amazon’s “arc of deforestation” – is being turned into small scale “silvopastoral” systems, where animals graze among trees.

The project, run the by the University of Exeter and local NGO Instituto Ouro Verde (the “Institute of Green Gold”), uses Inga trees – a diverse group from the legume family which take nitrogen from the air and lock it in the soil, keeping it fertile for the long term.

As the world marks Earth Day, about 60 hectares (almost 150 acres) have been converted to the new systems, improving incomes and future prospects for 20 smallholder families.

One farmer said the project had been a “huge incentive for me and many others”, while another said it had already made a “significant difference”.

“It’s the most amazing project I have seen. It’s totally uplifting,” said Professor Toby Pennington, of the Global Systems Institute and Department of Geography at the University of Exeter.

“I visited a few months ago and it’s clear from walking around that these farmers are now feeding themselves and beginning to sell food too.

“They have clear, long-term plans for the land, including growing fruit, and longer-term sources of income including timber and Brazil nuts.”

The project – a so-called “nature-based solution” – faced a rush late last year to plant as many Inga trees as possible in the early part of the wet season, which runs from October to March.

“They managed to get nearly all the trees in the ground before Christmas, which was amazing,” said Professor Pennington.

Much of the former forest was used as pasture, but the soil is nutrient-poor and is often abandoned by large-scale cattle farmers after a few years – with more rainforest then cut down for new pasture.

The Exeter-IOV project gives them a way to improve the soil and produce food in a sustainable way.

One of the farmers, Jose Florencio dos Santos, said: “We thank the project very much. I think it is here for the long term.

“When the project started, many people did not believe in it, but I think it will taken up by more people.”

Another farmer, Leondina Maria Jose Pereira, said: “This has been a lot of work for my husband and I, but I’m very happy, very content.

“This project has been a huge incentive for me and many others. Thank you from my heart.”

“I have 10 cows and their yield has increased from 40 to 50 litres [per day]. That’s not much but it represents more income.”

Many of the smallholders were given land about five years ago, but setting up farms on abandoned, nutrient-poor soil is difficult.

The project offers advice, support and the all-important Inga trees.

“One woman told me she had been living by the side of a road for years,” said Professor Pennington.

“Now she is farming her own land, feeding her family, and even selling excess produce in a local marketplace supported by IOV.”