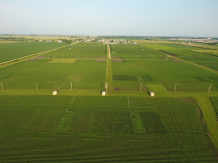 The study uses results from a field experiment in the USA. Credit: James Balz

The impact of ozone on soybean production can be predicted more accurately thanks to improvements to a computer modelling system.

Surface ozone is a pollutant that affects plant growth by entering leaves and reducing the rate of photosynthesis, and rising ozone levels could severely limit production of crops including soy.

Being able to estimate this damage on soybean production using a "climate-vegetation model" is vital for predicting global and regional soy yields in the future.

This study uses results from a field experiment in the USA, which found that a normal ozone level of 10ppm/h (AOT40) could reduce soybean yield by 10%.

At extreme ozone levels – comparable to those observed on very polluted days in some parts of the world – soybean production fell to less than half the amount grown in unpolluted air.

"Currently, ozone concentrations are projected to increase globally, which could have a significant impact on agriculture and food security," said Dr Felix Leung, of the University of Exeter.

"Economic loss from ozone damage to crops is already estimated at $14 billion to $26 billion USD.

"Policy decisions – such as the promotion of electric vehicles over diesel and petrol cars – are urgently required to limit surface ozone levels."

Ozone in the stratosphere protect us from harmful ultra violet radiation, but in the lower atmosphere, the troposphere, it is toxic to humans and plants.

As well as limiting photosynthesis – and therefore reducing carbon storage by plants – it is also a greenhouse gas, and is toxic to humans and animals.

Ozone is caused by a combination of pollutants including nitrogen oxide, which mostly comes from vehicle and factory emissions.

The climate-vegetation computer model used in this study is called JULES.

It was developed by a wide community of UK researchers, coordinated by the Met Office and Centre for Ecology and Hydrology.

"The newly calibrated version of JULES will be applied regionally and globally in future JULES simulations," said Dr Leung.

"This study helps to build a state-of-the-art impact assessment model and contribute to a more complete understanding of the impacts of climate change on food production."

The research team included Dr Karina Williams and Dr Andy Wiltshire, who were both among Met Office staff who took joint positions at the Global Systems Institute at the University of Exeter last year.

The study was funded by the Natural Environment Research Council (NERC).

The paper, published in the journal Geoscientific Model Development, is entitled: "Calibrating soybean parameters in JULES 5.0 from the US-Ne2/3 FLUXNET sites and the SoyFACE-O3 experiment."

Dr Leung is currently working as a postdoctoral research fellow at the CUHK-University of Exeter Joint Centre for Environmental Sustainability and Resilience (ENSURE).