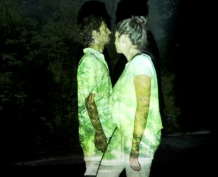 The science-fiction tale, Espiral, is set in 2049 in Colombia and sees two childhood friends exchange messages across an ideological divide.

The impact of social and political systems on Colombian forests is explored through a short story from a collaboration between Natural Environment Research Council (NERC) and Hay Festival.

The destruction and degradation of forests in Colombia is not simply down to a lack of understanding about conservation.

Instead, it is a long and intertwined history of politics, conflict and economics that threatens the resilience of these fragile eco-systems.

Now these complexities have been translated into a story by Colombian writer and activist Juan Cárdenas as part of Trans.MISSION II, a global project from NERC (a part of UK Research and Innovation) and Hay Festival, which pairs leading environmental researchers with award-winning storytellers to communicate cutting-edge science.

The science-fiction tale, Espiral, is set in 2049 in Colombia and sees two childhood friends exchange messages across an ideological divide.

One now works for “The Reserve” – a large scale mining operation in the Serranía de las Quinchas posing as a conservation project – while the other lives in one of the displaced communities on its fringe.

Cárdenas based the story on deforestation research led by Dr Ted Feldpausch, Dr Dunia Urrego, Professor Toby Pennington and Dr Lina Mercado, all of the Global Systems Institute at the University of Exeter, and Dr Naomi Millner, from the University of Bristol.

Their project, BioResilience: Biodiversity resilience and ecosystem services in post-conflict socio-ecological systems, examines the long-term resilience of Colombian forest ecosystems and aims to improve understanding of the implications of its loss or degradation for Colombian society.

Telling the story of the forest

Espiral was launched at Hay Festival Cartegena in Colombia (30 January-2 February 2020) and in the UK at the digital Hay Festival (24 May 2020) with an interview with Dr Feldpausch and Dr Millner. At the start of the project, Dr Millner admits she was initially “cautious about the idea” of using a simple story to communicate the complex contexts of their work in Colombia.

“There’s a long history of political conflict and, even further back, colonisation, which affects who gets to decide what and how,” she said,

“For example, in Serrania de las Quinchas the area is a protected natural park, but the people who live there were never consulted about where the borders should be. Even now they haven’t been fully informed about the implications of the zoning plans on their lives and economies.

“Juan worked to capture this by narrating part of the political backdrop to conservation. It’s his take on some of the forces and disagreements that shape conservation in Colombia today. He has shared that grasp of complexity and has taught us new tools for describing or telling without being reductive.”

Cárdenas, who has worked extensively with Afrocolombian and indigenous communities mapping oral traditions, accompanied the BioResilience Exeter-Bristol team on several fieldwork trips in the forests, and used both their research methods and findings to inform his creative writing.

And while the sterilised imprints of forest animals that inhabit his story represent a dystopian future, many of the other issues – such as displacement, data collection and storage, and conflict – are rooted in fact.

In addition, acclaimed author and illustrator Chris Haughton has created an innovative new animation by this research.

Dr Feldpausch said: “It was fascinating to bring together the physical science with arts and humanities with the science-fiction story with Juan, since our BioResilience research project in Colombia is jointly funded by NERC and the UK Arts and Humanities Research Council.

“The story is one of several approaches we are taking to communicate our research in new ways to a wider global public audience.

“We were able to interact with a completely new audience through the Hay Festival at Cartagena, Colombia and in Wales.

“This then led to us working with Chris Haughton to develop an animation which brings our research to life in vivid images to show what we are studying and why it is important to conserve forests and biodiversity to ensure all habitats and communities thrive.”

At a time of unprecedented interest in how human actions affect the environment, Trans.MISSION II is a series of collaborations that aim to increase public understanding of these complex issues in a way that both engages and informs.

As well as the Colombian project, a Peruvian strand culminated at Hay Festival Arequipa (7-10 November 2019) with the launch of Glacier Shallap, a short play from writer and actress Erika Stockholm drawing on the work of Cabot Institute’s Professor Jemma Wadham and her team of glaciology experts in the High Andes.

The UK project – Day Zero and Chips – sees British writer and journalist Patrice Lawrence interpret the water scarcity research of scientists Dr Sarah Ayling and Professor Lindsey McEwan from the Department of Geography and Environmental Management at the University of the West of England, Bristol, at Hay Festival Digital (18-31 May 2020).