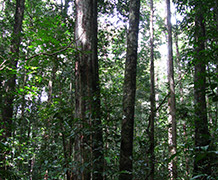 Scientists unravel how and why Amazon trees die

A huge new study has unravelled what factors control tree mortality rates in Amazon forests and helps to explain why tree mortality is increasing across the Amazon basin.

The capacity of the Amazon forest to store carbon in a changing climate will ultimately be determined by how fast trees die.

The new analysis found that the mean growth rate of the tree species is the main risk factor behind Amazon tree death, with faster-growing trees dying off at a younger age.

These findings have important consequences for our understanding of the future of these forests.

If climate change leads to forests made up of trees that are more likely to die younger, they will also store less carbon.

The study, co-led by the Universities of Leeds and Birmingham in collaboration with more than 100 scientists from institutions including the University of Exeter, is the first large-scale analysis of the causes of tree death in the Amazon and uses long-term records gathered by the international RAINFOR network.

The results published in Nature Communications, show that species-level growth rates are a key risk factor for tree mortality.

“Understanding the main drivers of tree death allows us to better predict and plan for future trends – but this is a huge undertaking as there are more than 15,000 different tree species in the Amazon,” said lead author Dr Adriane Esquivel-Muelbert, of the Birmingham Institute of Forest Research.

Dr David Galbraith, from the University of Leeds, added: “We found a strong tendency for faster-growing species to die more, meaning they have shorter life spans.

"While climate change has provided favourable conditions for these species, because they also die more quickly the carbon sequestration service provided by Amazon trees is declining.”

Co-author Dr Ted Feldpausch, Associate Professor in Geography and the Global Systems Institute at the University of Exeter, said: "The growth strategies of trees that live and die in forests can have a big impact on how forests store carbon.

"But, if those fast-growing trees die at a younger age, as shown in our study for intact forests, with the carbon they store then lost via decomposition, then the carbon gains will be short-lived compared to carbon storage in long-lived species."

Tree mortality is a rare event so to truly understand it requires huge amounts of data.

The RAINFOR network has assembled more than 30 years of contributions from more than 100 scientists.

It includes records from 189 one-hectare plots, each visited and monitored on average every three  years.

At each visit, researchers measure all trees above 10cm in diameter as well as the condition of every tree.

When trees die, the researcher follows a fixed protocol to unravel the actual cause of death.

“This involves detailed, forensic work and amounts to a massive ‘CSI Amazon’ effort conducted by skilled investigators from a dozen nations," said Professor Oliver Phillips, from the University of Leeds.

Dr Beatriz Marimon, from UNEMAT, who coordinates multiple plots in central Brazil, added: “Now that we can see more clearly what is going on across the whole forest, there are clear opportunities for action.

"We find that drought is also driving tree death, but so far only in the South of the Amazon.

"What is happening here should serve as an early warning system as we need to prevent the same fate overtaking trees elsewhere.”

The research was funded by the Natural Environment Research Council and included contributions from 10 UK universities as well as scientists from across South America in Bolivia, Brazil, Colombia, Ecuador, French Guiana, Guyana, Peru and Venezuela.