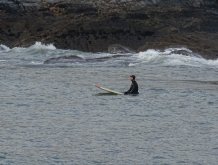 Dr Rob Brewin on his surfboard. Credit University of Exeter

Phytoplankton are at the base of ocean food chains, and nearshore waters like the "surf zone" often contain the highest levels of these tiny organisms.

However, sampling water in the surf zone is difficult, so data on some aspects of this environment is scarce.

Dr Bob Brewin – a surfer and scientist from the University of Exeter – took to the waves to collect water samples to analyse seasonal changes in phytoplankton.

And the research team – led by Exeter and Plymouth Marine Laboratory – are working to gather more data from surfers, swimmers, kayakers and others who use nearshore waters.

"Nearshore waters often have the highest levels of biodiversity in the ocean," said Dr Brewin, of Exeter's Penryn Campus in Cornwall.

"Phytoplankton are a very important component of that, but at present we struggle to monitor seasonal and longer-term changes in nearshore phytoplankton concentrations.

"It's hard to take research vessels or build monitoring stations in places where waves are constantly breaking, and this leaves key gaps in our knowledge."

The new study, based 67 samples taken by Dr Brewin off Bovisand Beach near Plymouth (UK) in a 12-month period, is intended as a pilot to see if this citizen-science approach could be used more widely.

The samples were tested for chlorophyll-a concentration (a proxy of phytoplankton biomass) and compared with data from a recording station about four miles offshore.

The results suggest phytoplankton levels nearshore and offshore are similar in autumn, winter and spring.

However, in July and August phytoplankton biomass was much higher in nearshore waters than offshore – where levels dropped dramatically.

Dr Brewin said the likely cause of this is that the spring bloom of phytoplankton in offshore waters depletes chemical nutrients, and these relatively stable waters don't churn enough over the summer to replenish them.

Meanwhile, the constant motion of waves near the shore stirs up nutrients, and together with nutrients from river run-off, this allows phytoplankton to continue blooming.

Dr Brewin said more research is needed to test and confirm this hypothesis, and to investigate the possible impacts of climate change in nearshore waters.

"The timing and distribution of these blooms is critical for how energy moves up the food web," he said.

"For example, fish larvae need that phytoplankton to feed – if the timing is just a little bit off, that can be devastating for the growth of the larvae."

Speaking about the use of surfers and other ocean users as citizen scientists, he added: "If we start now, in 20 or 30 years we could have a really good understating of how climate change is impacting the nearshore environment."

Lead author Elliot McCluskey said: "Surfers and other water sports enthusiasts are regularly going in and out the ocean for fun, all around the world.

"Many have an intrinsic desire to protect the regions they inhabit. Our work suggests they could to that by helping to understand the cycles of life in the ocean."

The paper, published in the journal Oceans, is entitled: "On the Seasonal Dynamics of Phytoplankton Chlorophyll-a Concentration in Nearshore and Offshore Waters of Plymouth, in the English Channel: Enlisting the Help of a Surfer."