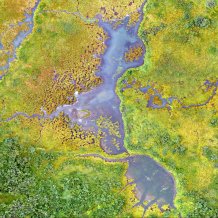 Satellite imagery of a wetlands in the Rocky Mountains of Colorado.

Resilience of ecosystems can be measured from space

A natural habitat's ability to withstand and recover from damage can be empirically monitored from space – and the method may prove important during upcoming decades of climate and land-use change.

The first study to empirically document that vegetation resilience can be measured from space is published today in Nature Climate Change by a research team from the University of Potsdam, the Potsdam Institute for Climate Impact Research (PIK), the Technical University of Munich (TUM) and the University of Exeter.

The method will likely be important for future assessments of declines in vegetation resilience due to anthropogenic climate change and unsustainable resource management.

"New ways of handling large data sets make it possible to check on widely held theories and assumptions about how ecosystems function," said lead author Taylor Smith, from the University of Potsdam.

"Our work empirically confirms of one of those theories – that it is possible to measure how resilient vegetation is to outside pressure with a straightforward mathematical model."

The study used observational data to estimate the variability of global vegetation as well as the speed of recovery after large losses in vegetation.

By analysing different satellite products since 1992, the group shows that simple metrics can be used to estimate the resilience of ecosystems to large shocks – even where large losses of vegetation haven’t happened yet.

"So far it has been difficult to reliably measure vegetation resilience at a global scale," said co-author Niklas Boers, TUM, PIK and Exeter's Global Systems Institute.

"We used powerful mathematical results to overcome this problem.

"This allows us to continuously measure changes in vegetation resilience at any place on the Earth’s surface.

"We provide a solid, empirically confirmed framework for monitoring vegetation resilience from space."

The work further reveals that in many regions, global vegetation has lost resilience over the last two decades, meaning vegetation has become more vulnerable and takes longer to regain its natural equlibrium after disturbances.

The analysis shows that, on average, vegetation initially gained resilience globally during the ’90s.

Then a shift took place with a more pronounced resilience loss since the early 2000s.

Numerous factors might contribute to this shift, such as natural variability, anthropogenic climate change, increasing human land use and deforestation, and a higher frequency of droughts and wildfires.

"We urgently need to intensify our efforts to detect potential changes in vegetation resilience and to understand the underlying drivers," said Boers.

"We expect anthropogenic global heating as well as land-use change to play an important role, but many processes aren’t well understood, making it difficult to predict the fate of natural vegetation systems in the coming decades."

Smith added: "Satellite data can play a crucial role here, particularly in continuously monitoring the health of vegetation and other ecosystems."

The study is part of the TiPES project, an EU Horizon 2020 interdisciplinary climate science project on tipping points in the Earth system. 18 partner institutions work together in more than 10 countries.

TiPES is coordinated and led by The Niels Bohr Institute at the University of Copenhagen, Denmark and the Potsdam Institute for Climate Impact Research, Germany.