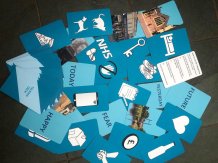 Over a series of workshops, staff, volunteers, researchers and people with lived experiences came together to co-design the Talking Deck pack

Talking Deck to help people with life and health issues

A new "Talking Deck" will help shape conversations at an Exeter wellbeing hub.

The Talking Deck is a selection of cards – including symbols, words and place-based images – carefully chosen to help people speak about the issues that are important to them.

The deck will be used at Colab Exeter's wellbeing hub, with the aim of facilitating conversations that are led and shaped by individuals seeking support.

It has been co-designed by researchers from the University of Exeter, staff and volunteers at Colab Exeter, people with experience of homelessness, and artist Hugh McCann.

CoLab Joint CEO Fiona Carden said: “Listening and co-production has been at the heart of this project.

"We’ve created these together with people from all sectors and walks of life.

"The cards are a way to facilitate conversations and help people find a way forward without getting to crisis point.

"People want to be listened to, first and foremost. To be seen and be validated.”

University of Exeter researcher Professor Catherine Leyshon said: “Seeing the Guided Conversation transform into the Talking Deck has been an incredibly exciting and rewarding process.

"We have worked alongside staff from Co-lab and people with lived experience to produce something that can genuinely help people to have more in-depth, productive conversations about their needs, aspirations, hopes and fears.”

"Support workers who have tried them out reported back that they were surprised how well such a simple tool opened up conversations, and helped people to talk about things that were important to them that they hadn’t raised before.”

The project was a partnership between researchers from the University of Exeter (Catherine Leyshon and Shukru Esmene from the Social Innovation Group, and Lorraine Hansford from the Wellcome Centre for Cultures and Environments of Health), Colab Exeter and Devon Mind, funded through an ESRC Impact Accelerator Account (IAA) award and the Interreg 2 Seas HAIRE project.

The IAA helped to translate the main principle of HAIRE’s Guided Conversation tool (using meaningfully co-designed visuals to facilitate wellbeing-related conversations) into a resource that suited CoLab Exeter’s working culture and the individuals who use their wellbeing hub.

Over a series of workshops, staff, volunteers, researchers and people with lived experiences came together to co-design the Talking Deck pack.

The packs are currently being trialled by staff and volunteers at Colab and in other organisations, for example Julian House have experimented with using the Talking Deck in key worker support sessions with young adults in supported accommodation.

So far, feedback from users of the Talking Deck has focussed on how the cards help facilitate conversations that are led by the individual, rather than the staff member.

Workers commented that using the cards had given them more insight into people’s interests and concerns, and "opened different doors" for people to talk about what is important to them, with issues sometimes emerging that would not necessarily come up in standard assessments used by the organisations.

A support worker at Julian House said: "I was sceptical at first... I was quite surprised at how it was more powerful than I thought."

Another said: "It’s another way of communicating with people, pictures have a connection to memories. For people who are vulnerable, talking can be intimidating, and it can bypass that in a gentle way."

The project does not intend to be prescriptive about how the resource is used, so that staff and volunteers can use the prompts in a way that best suits their service users.

Importantly, a Mental Health Alliance, including CoLab Exeter and Devon Mind, can potentially provide a platform for practice-led exchanges and skills sharing to take place.

After collating a last round of feedback, the Talking Deck was launched at an event at Colab Exeter on 3rd May 2022.

To find out more about the Interreg 2 Seas HAIRE project visit: https://blogs.exeter.ac.uk/haire/