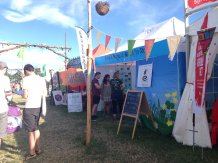 Arctic Basecamp, Sex & Bugs & Rock ‘n Roll and the Plant Power Station are among a host of stalls to visit.

Visitors can talk face-to-face with approachable scientists working on some of the world’s most critical problems and exciting innovations.

Science Futures offers a counter-balance to the misuse of science on social media, political spin and fake news.

Performances will take place on stage at the Laboratory, while the Futurarium will host numerous stands and exhibits.

Arctic Basecamp, Sex & Bugs & Rock ‘n Roll and the Plant Power Station are among a host of stalls to visit.

The Sound Canopy will take visitors on an audio journey from deep underground to outer space, while an outdoor exhibition called Science, Not Fiction will explore art's role in science and science's role in art.

"Science Futures is all about sharing the curiosity and fascination of scientific discovery," said Science Futures coordinator Dr Emma Sayer, from Lancaster University.

"Lots of people see science as technical and complicated but we’re showing that it can be accessible and a lot of fun.

Professor Richard Betts MBE, of the University of Exeter and the Met Office Hadley Centre, said: "Events like Glastonbury bring a diverse range of people together, allowing them to speak face-to-face about important issues such as climate change.

“We’ve found that a lot of people welcome the opportunity to find out more about what they’ve heard on the news and social media.”

Richard, a Lead Author with the Intergovernmental Panel on Climate Change (IPCC), added: “I’m really looking forward to chatting with people, answering their questions and hearing their views.”

Professor Gail Whiteman, of the University of Exeter Business School and founder of Arctic Basecamp, said: "We all want a green future, but that means facing the reality of an Arctic that is warming three times faster than the rest of the planet.

"What happens in the Arctic doesn't stay there. That's why we've brought a real Arctic Basecamp to Glastonbury.

"By sharing our knowledge and passion for climate action, we hope to inspire and be inspired by this unique audience."

Shows on the Laboratory stage will include:

Stalls at Science Futures will include:

-          Arctic Basecamp is a team of Arctic experts and scientists who, for the last five years, have brought the Arctic to the World Economic Forum (WEF) annual meeting at Davos. They are calling for action from global leaders to address global risks from Arctic change.

-          Sex & Bugs & Rock ‘n Roll's enthusiastic researchers want to share their fascination for the natural world and make science accessible to everyone. They love music and think scientists should be more approachable – so where better to have a bit of fun with science than at Glastonbury?

-          Waves of Change (University of Bristol) are a group of anthropologists, climate scientists and artists co-producing animated films with young people to imagine positive futures and spread climate hope. They will be making animations in their tent and building a sculpture with the public on the theme of climate hope – which they'll then turn into an animated film!

For the full line-up – and exciting announcements as the festival approaches – visit: https://glastosciencefutures.org