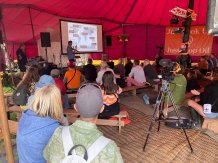 An audience at the Glastonbury Festival has heard how people power can tackle the climate crisis.

He spoke about his great-great aunt, the suffragette Lilian Lenton, who was arrested in 1913 on suspicion of starting a fire at the Kew Gardens tea house.

She went on hunger strike and became ill due to force-feeding - leading to public outcry.

Professor Lenton said her actions helped “turn public opinion”. Some women got the right to vote five years later, then all women over 21 in 1928.

The example shows how individuals and coalitions can be the “triggers of change”, and this can be true now as it was more than a century ago.

“We can all be a part of triggering positive tipping points,” said Professor Lenton, Director of the Global Systems Institute at the University of Exeter.

“We are not powerless in all this.”

As well as sparking social movements - as Greta Thunberg did - Professor Lenton said people can help drive the spread of ideas and values, for example by joining the switch to plant-based diets.

In a talk at Glastonbury’s Speakers Forum, he highlighted the decline of coal power generation in the UK as another positive tipping point.

In this case, he said a modest tax on coal tipped it from being barely profitable to being unprofitable - causing an irreversible decline in coal generation.

With time running out to limit global warming to 1.5C above pre-industrial levels, Professor Lenton said: “We need to find and trigger some positive tipping points.”