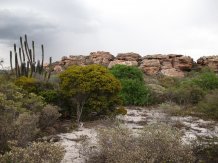 A new "resilience sensing system" can identify ecosystems that are in danger of collapse, research shows.

The system uses satellites to spot areas of concern – including those at risk of "tipping points" – and can also measure the success of conservation and restoration efforts.

Resilient ecosystems have a greater ability to recover shocks such as droughts, fires and floods – so a decline in resilience makes an ecosystem more vulnerable.

The research team, led by the Global Systems Institute (GSI) at the University if Exeter, have developed a prototype sensing system.

Its initial results suggest global average resilience has declined in the last 20 years.

"By identifying regions that are losing resilience, this system shows us which places we should be most concerned about," said GSI Director Professor Tim Lenton.

"It can raise a red flag, guiding action to restore resilience.

"This is especially important in places that might have a tipping point (a threshold that sparks irreversible change), such as the Amazon rainforest."

A recent study by the GSI team showed that the Amazon rainforest is losing resilience – a situation "consistent" with an approaching tipping point that could trigger dieback and turn much of the forest to savannah.

The new paper is based on regular Normalized Difference Vegetation Index (NDVI) measurements to see how ecosystems respond to changing conditions.

Its results, based on 20 years of NDVI data, include:

-          "Pronounced" loss of resilience in the Eastern Mediterranean, Central America and the Caatinga (north-east Brazil), all of which have been experiencing prolonged drought.

-          The strongest trends of declining resilience are in tropical and subtropical dry broadleaf forests, montane grasslands and shrublands.

-          The study "zoomed in" on south and east Asia and picked out example regions where resilience has been lost: dry deciduous forests in India, conifer forests in China and a "large part" of the Mongolian steppe grasslands.

Professor Lenton said the sensing system can measure the effectiveness of projects such as TIST, through which thousands of farmers have planted and protected millions of trees across four countries.

"You can see whether these projects are giving resilience back to an ecosystem," he said.

The system now needs to be developed further, and Professor Lenton said including marine ecosystems (not just those on land) would be a major step forward.

Funders included the Leverhulme Trust and the Alan Turing Institute.

The paper, published in the journal Philosophical Transactions of the Royal Society B, is entitled: "A resilience sensing system for the biosphere."