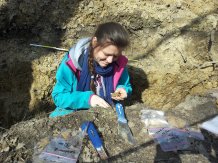 Analysing the charred remains of plants can confirm the locations of asteroid strikes in the distant past, new research shows.

Based on estimates of crater-producing asteroid strikes in the last 11,650 years (known as the Holocene), only about 30% of impact sites have been located.

Until now, there has been no way to distinguish between normal land structures and very small asteroid craters unless pieces of iron meteorites were found nearby.

In the new study, an international team of researchers found that charcoal around craters is different from wildfire charcoal – so analysing samples allows scientists to work out the origin of small craters.

"The properties of organisms turned into charcoal reflect the conditions in which they were killed," said lead author Dr Ania Losiak, from the Institute of Geological Sciences, Polish Academy of Sciences and the University of Exeter.

"Those conditions, such as the heat the wood was exposed to or the duration of the heating, leave tell-tale signs in the material’s structure.

"For example, charcoal from low-energy surface fires, like burning bushes and leaves, has different properties than charcoal from high-intensity wildfires.

"Impact charcoals are very strange. They all look as if they were formed in much lower temperatures than wildfire charcoals, and they are all very similar to each other, while in a wildfire it is common to find strongly charred wood just next to barely affected branches."

Dr Losiak worked on the research as part of a Marie Sklodowska-Curie Individual Fellowship at the University of Exeter wildFIRE lab, led by Professor Claire Belcher.

The research team dug trenches in rims of four craters (Kaali Main and Kaali 2/8 in Estonia, Morasko in Poland, and Whitecourt in Canada).

"The differences between wildfire charcoal and impact charcoal proved to be dramatic and surprising," said Professor Belcher, part of Exeter's Global Systems Institute.

"While wildfire charcoal is considerably varied in its reflectivity, depending on the local conditions during the fire, impact charcoals showed uniform characteristics despite coming from completely different locations and being formed thousands of years apart.

"This presents an opportunity for geologists looking for unrecognised impact craters."

Professor Chris Herd, from the University of Alberta, said: "This study improves our understanding of environmental effects of small impact crater formation so that in the future, when we discover an asteroid a few metres across or more coming our way only a couple of weeks before the impact, we will be able to more precisely determine the size and type of evacuation zone necessary."

Dr Losiak added: "Since 1900, two impacts – in Tunguska and Chelyabinsk – caused damage on a massive scale.

"In order to prepare for any future threats, we need to understand how often collisions like that occur.

"And to do that, we need to look to our planet’s recent past."