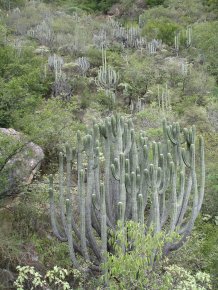 'Forgotten' forests and savannas vital to people, biodiversity and climate

With massive international focus on rainforests, the vital importance of tropical dry forests and savannas is being overlooked, researchers say.

These ecosystems cover about 50% of the tropics, in seasonally dry climates that are also home to almost a third of the world's people – including many of the economically poorest.

Professor Toby Pennington, from the University of Exeter and the Royal Botanic Garden Edinburgh (RBGE), and Dr Caroline Lehmann, Head of Tropical Diversity at RBGE, have highlighted the urgent need to understand and protect these ecosystems.

Both researchers are co-authors of a new paper, published today in the journal Nature, that formally classifies the world's ecosystems – including dry forests and savannas.

"Having clear definitions is a vital step towards projecting these ecosystems, which are too often forgotten," said Professor Pennington, part of Exeter's Global Systems Institute.

"Protecting rainforests such as the Amazon is obviously crucial, but policymakers, the public and even conservation groups sometimes forget that other parts of the natural world also need protection.

"In Brazil, past efforts at rainforest protection have simply displaced the problem – leading to the loss of savannas and dry forests instead.

"People living in seasonally dry tropical regions depend on savannas and dry forests for essentials including food, water, medicines, building materials and fuel.

"These ecosystems can be home to as many plant species as rainforests, and their role in the carbon cycle – and therefore climate change – is poorly understood.

"Better understanding of these ecosystems, and how to preserve or restore them, is vital to ensuring a sustainable future for their rich biodiversity and vulnerable human populations."

Professor Pennington warned that the "agricultural frontier" is advancing into these dry tropical ecosystems – especially savannas – even faster than rainforests.

Due to "historical destruction" and little or no formal protection, less than 10% of dry forest area now remains – and hardly any of these remaining areas are protected, he said.

"Unless we raise the profile of savannas and dry forests, we are not going to change that," he added.

Dr Lehmann, a leading expert on savannas, said: "As the rates and intensity of human modification of the Earth increases, the need for a capacity to understand and compare the assembly of all of Earth’s ecosystems intensifies in urgency.

"Ecology is local, but ecosystems across regions and continents are generally shaped by similar processes. Our framework enables that comparison of diverse ecosystems for the first time.

"Savannas are one of the great biomes of the world and here for the first time we recognise the foundational role of processes such as fire and herbivory (animals eating plants) in shaping their dynamics, enabling a new worldwide comparative understanding."

In the new Nature paper, "A function-based typology for Earth’s ecosystems", a global cross-disciplinary team of scientists led by UNSW Sydney researchers has developed the first comprehensive classification of the world’s ecosystems across land, rivers and wetlands, and seas.

This will enable more coordinated and effective biodiversity conservation, critical for human wellbeing.

The University of Exeter is involved in a range of projects focussed on global drylands (dry forests and savannas).

The SECO project examines the carbon cycle in drylands, while the DRYFLOR network aims to improve understanding and conservation of the endangered dry tropical forests of Latin America.

Professor Pennington was part of a team that used the term "biome awareness disparity" (BAD) to describe failure to appreciate the significance of all biomes in conservation and restoration policy.