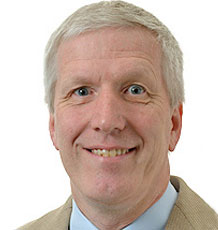 Bruce Webb obtained his BSc in Geography and Geology and PhD in Geography at the University of Exeter. He has spent his subsequent academic career at Exeter, where he held the positions of Lecturer, Senior Lecturer and Reader in Physical Geography, before being made Professor of Physical Geography in 1998. He was awarded a DSc from Exeter University in January 2008 for his research on Water Quality of Stream and River Systems.

He won the British Association for the Advancement of Science Lyell Lectureship in 1990. He has served as the UK National Correspondent to the International Association of Hydrological Sciences (IAHS) for Water Quality and is a past Secretary and past President of the IAHS International Commission on Water Quality. Bruce has also been the Secretary and the President of the British Hydrological Society, and is a former Treasurer of the British Geomorphological Research Group (now the British Society for Geomorphology).

Bruce is a former Assistant Editor of the International Journal Hydrological Sciences Journal and was Editor of Geoscience in South-West England, the Journal of the Ussher Society from 2012 to 2015.

Bruce retired in 2011 and was made an Emeritus Professor of the University.

Bruce’s research interests lie primarily in the field of water quality with a particular focus on the thermal behaviour of stream and river systems, but he also studies sediments, particulate-associated substances and nutrients and general chemistry in rivers. Methodologically, much of Bruce’s work involves detailed field investigations of the physical processes controlling water quality, and long-term monitoring of river systems. He is interested in the impact of climate and land-use change on water quality and in the implications of changing conditions for stream ecology. Topics addressed by this work include long-term changes in the thermal regime of regime of European rivers in relation to past and future climate change and to human impacts through river regulation, forestry practices and heated effluent discharges; energy budgets of streams and rivers; effects of global warming on freshwater fish and invertebrates; present and future fine sediment budgets of river systems; methods for estimating fluvial fluxes of sediments and chemical substances; and evaluation of the role of fine sediment in river nutrient transport.

Bruce is the author and editor of over 140 books, journal articles and research reports.

Currently, Bruce's interests are focussed on the Physical Geography of South-West England.

During his career at Exeter, Bruce taught undergraduate courses on Science and Physical Geography, Weathering and Slopes, Hillslope and Drainage Basin Geomorphology, Fluvial Systems and Fluvial Geomorphology, Coasts, Thermal Behaviour of Stream and River Systems, and Physical Geography of South-West England. He contributed lectures on sampling design and multivariate statistics to practical courses and convened a module on Physical Geography Practice, and he also took field classes to Devon, the Channel Islands, Wales, Spain and Austria. He also taught Water Quality on MSc programmes, and supevised more than twenty postgraduate students to successful completion of higher degrees.