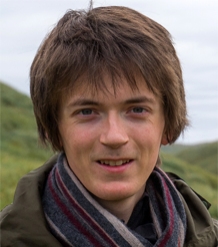 My research links protistology and palaeoclimatology, and primarily centers on terrestrial peat-forming ecosystems in the region surrounding Antarctica.

Impacts of changes in the ocean on coastal freshwater peatlands, and the unique biological records produced by such interactions, are the central theme of my research. More specifically, my overarching aim is to better understand how the microbial communities inhabiting coastal peatlands respond to the addition of oceanic salt, which can occur via atmospheric-spray deposition, inundation during storms, and as a result of sea-level change.

As a protistologist my principle focus is on testate amoebae, a group of microbial eukaryotes that produce decay resistant shells and can be found in almost every freshwater ecosystem on Earth. The intricate beauty, ruggedness, and ability of these protists to perform complex functions fascinates me. In addition to developing their use as salinity bioindicators, I aim to improve understanding of the other global environmental and biogeographical controls responsible for their distributional trends around Antarctica.

Previously, I studied the diversity and ecology of testate amoebae communities on sub-Antarctic Marion Island for my MSc by Research in Physical Geography. Prior to this I worked on a project assessing the global impact of sea-level change on the carbon sink of coastal peatlands, which was published in Scientific Reports in 2016. I received a first class BSc degree with Honours in Physical Geography from the University of Exeter in 2015, where I was the recipient of the Lewis memorial prize for academic achievement.

I am now based at the British Antarctic Survey, Cambridge.

2) Sub-Antarctic palaeoclimate: As part of my research into the salinity response of testate amoebae I developed a novel palaeoenvironmental proxy that allows these micro-organisms to be used to reconstruct wind conditions from peatland archives. The methodology uses testate amoebae preserved in coastal peatlands to reconstruct past variation in the deposition of wind-blown oceanic salt spray, which in turn indicates former wind conditions.

3) Biodiversity and biogeography of testate amoebae: Through exploration of previously un-sampled locations, combined with a synthesis of existing records, I work toward assessing evidence for bioregionalisation and endemism in the testate amoebae communities of peatlands and lakes within the sub-, maritime- and continental Antarctic. I have a particular interest in the relationship between present day testate amoebae community composition and the glacial history and climate of the sub-Antarctic islands.