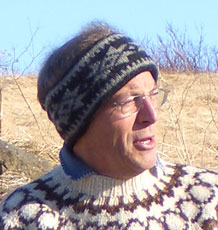 Chris has an MA in Geographical Studies from University of St. Andrews (1973) and a PhD entitled Aspects of the Vegetation History of Southern Perthshire from the same university (awarded in 1980). He joined the Exeter Geography Department in 1976 as Lecturer, was promoted to Senior Lecturer in 1989, made a Reader in 1997 and gained his Chair in 2002. He has served terms as Head of Department and Head of School and is currently Director of Education for Geography on the Cornwall Campus having moved there fully in 2006.

Chris's main interests are in the field of Late Quaternary environmental change, particularly in sub-arctic/sub-alpine environments in Iceland and Norway, as well as in SW England. He also works on the impact of past human communities on the landscape, originally in Scotland, but now also in Ireland and SW England, utilising both sediments and material from archaeological sites. This research has attracted support from a range of sources including NERC, The Leverhulme Trust and The Royal Society. Chris has been Chair of both NERC radiocarbon laboratory steering committees (RCLSC and ORADS), was Chief Editor of the Journal of Quaternary Science between 2006-2010, and is currently an Associate Editor. He is also on nthe Editorial Board of Jökull, the Icelandic Journal of Earth Sciences.