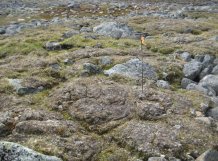 Periglacial zones, where there is often a layer of frozen ground known as permafrost, make up about a quarter of the Earth’s land surface and are mostly found in the far north and south, and at high altitudes.

Scientists from the universities of Exeter and Helsinki and the Finnish Meteorological Institute examined natural processes caused by frost and snow which take place in these zones.

Their findings suggest that – even with optimistic estimates of future carbon emissions – areas covered by periglacial zones will reduce dramatically by 2050, and they will “almost disappear” by 2100.

This would have a major impact on landscapes and biodiversity, and could trigger climate “feedbacks” – processes that can amplify or diminish the effects of climate change.

“The results suggest that profound changes can be expected in current periglacial zones regardless of climate change mitigation policies,” said Dr Juha Aalto, of the University of Helsinki and the Finnish Meteorological Institute.

“Unfortunately, it seems that many of the frost-driven processes we studied are already at the margin of the climate in which they can exist.”

The scientists studied four processes which take place in periglacial zones, including snow accumulation sites and “frost churning” – which refers to mixing of materials caused by freezing and thawing.

“Our results forecast a future tipping point in the operation of these processes, and predict fundamental changes in ground conditions and related atmospheric feedbacks,” Dr Aalto added.

Dr Stephan Harrison, of the University of Exeter’s Penryn Campus in Cornwall, said: “The project used very high-resolution climate and land surface models to demonstrate that geological processes and ecosystems in high latitudes (the far north and south) will be fundamentally altered by climate change during this century.”

Even based on the optimistic RCP2.6 estimate for future carbon emissions, the researchers predict a 72% reduction in the current periglacial zone in the area of northern Europe they studied.

By 2100, periglacial zones in will only exist in high mountain regions, they say.

Professor Miska Luoto, of the University of Helsinki, said: “The anticipated changes in land surface processes can feedback to the regional climate system via alterations in carbon cycle and ground surface reflectance (light reflected by snow and ice) caused by the increase of shrub vegetation to alpine tundra.

“Our results indicate significant changes in Northern European plant life. Many rare species can only be sustained in areas of intense frost activity or late-lying snow packs, so the disappearance of such unique environments will reduce biodiversity.”

The research is part of the INFRAHAZARD project, funded by the Academy of Finland. The study was also funded by the EU’s Seventh Framework Programme for Research and Technological Development and by the EU HELIX programme.