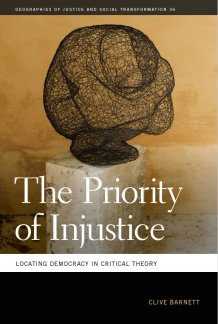 The Priority of Injustice; Locating Democracy in Critical Theory, by Clive Barnett.

The romantic belief that radical political change is driven by protests in the streets and other expressions of authenticity is “poorly suited” to understanding the reality of contemporary political action, a new book argues.

In The Priority of Injustice, Professor Clive Barnett challenges both the widespread lament that we live in a post-political world and the view that genuine transformation lies in innovative rediscoveries of real participation. The book proposes that many strands of radical political thought rely on simplistic models of all-encompassing systems of control that can only be changed through dramatic disruptions of the status quo. “Whether you are looking at revived forms of anarchist thought, or post-structuralist philosophies of radical democracy, or theories of deliberative democracy, a great deal of recent critical thinking on democracy relies on idealized theories of what proper politics should look like”, said Professor Barnett, of the Department of Geography at the University of Exeter’s Streatham Campus.

“There is a widespread consensus that democracy is menaced by neoliberalism, widening inequality, creeping technocracy, and the consolidation of elites. It is a consensus that leads many radical scholars to search for the possibilities of democratic renewal in the upsurge around the world of demonstrations in public spaces, in the potentials of online communication, in experiments in participatory governance, or in the devolution of power to local communities or cities. All of these activities are interpreted as bringing people closer together and enabling them to express their opinions and grievances in more authentic and immediate ways than is allowed for by party politics and electoral representation. In a way, this style of analysis arises from a wish to avoid making authoritarian claims to know better than ordinary people what is good for them. But it risks ending up by supposing that either some particular group or some specific form of resistance is the embodiment of pure political virtue.”

Building on his research on the different roles played by urban processes in generating political contention (in part funded by the Leverhulme Trust), and bringing together insights from human geography and political theory, Professor Barnett’s book unpacks the philosophical assumptions and space and time that underlie different traditions of radical democratic theory. “The book lays out an agenda for investigating how experiences of injustice and demands for recognition, redress, and repair are processed across a variety of geographical scales. I argue that critical theory should shift away from a constricted focus on dramatic claims against exclusion and towards a broader concern with the institutional and organisational conditions that are required for us to judge when and where justice is done”.

Further details about the book are available at http://www.ugapress.org/index.php/books/index/priority_of_injustice