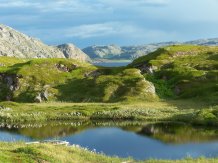 Pioneering new research has provided a fascinating new insight in the quest to determine whether temperature or water availability is the most influential factor in determining the success of global, land-based carbon sinks.

The research, carried out by an international team of climate scientists including Professors Pierre Friedlingstein and Stephen Sitch from the University of Exeter, has revealed new clues on how land carbon sinks are regulated on both local and global scales.

The groundbreaking study revealed that, globally, the year-to-year variability of the land carbon balance – the exchange of carbon that takes place between the land biosphere and the atmosphere – responds most significantly to changes in temperature. On a more localized level, however, the study suggests that water availability is the dominant factor in determining how successfully carbon sinks are performing.

Professor Friedlingstein, Chair of Mathematical Modelling of Climate Systems at the University of Exeter said: “The strong response of the land carbon cycle to climate variability such as El Niño events has always been on our radar as a test-bed for the carbon cycle response to future climate change. Our study highlights the importance of changes in soil water availability to plants as a key element. It’s not just about global temperature”.

At present, land-based ecosystems absorb around one quarter of all man-made carbon dioxide emitted into the atmosphere.

Current climate change is characterized by rising atmospheric carbon dioxide (CO2) concentrations and associated warming. However, the annual growth rate of CO2, which has been measured in the atmosphere for several decades, varies largely from year to year.

These variations originate primarily from fluctuations in carbon uptake by land ecosystems driven by the natural variability of the climate system, rather than by oceans or from changes in the levels of man-made carbon emissions.

Discussions on whether temperature or water availability is driving the strength of these variations in the land carbon sink have been highly contested with these year-to-year changes of the carbon balance seemingly related to global or tropical temperatures. However, other studies find that the largest carbon balance variability is seen in wide-spread water-limited regions.

In this latest study, the team of researchers applied empirical and process-based models, to analyze local areas, as well as the global surface, and the effect of temperature and water availability variations on carbon exchange between the atmosphere and the terrestrial biosphere.

The team found that, locally, water availability provides the most dominant cause of the year-to-year variability of both CO2 uptake in plants by photosynthesis, and CO2 release from plants and microbes respiration. However, on a global scale variability is mostly driven by temperature fluctuations, the research showed.

“What looks quite paradox at a first view, can be illustrated by looking close at the different spatial and temporal variations of the biosphere-atmosphere interactions”, explains Dr. Martin Jung, lead author of the Nature publication. “There are two compensatory effects of water availability: first, at the local scale, temporal water-driven photosynthesis and respiration variations compensate each other.”

“In addition, on a global scale, anomalies of water availability also compensate in space” adds Jung. “If it is very dry in one part of the world, it is often very wet in another region, thus globally water-controlled anomalies in net carbon exchange outweigh in space.”

Besides shedding light on previously contradictory findings, the outcome also points to the need for a research focus on how climate variables change while scanning across different scales and under global warming conditions.

“The simple relationship between the temperature and the global land carbon sink should be treated with caution, and not be used to infer ecological processes and long-term predictions” adds Dr Reichstein, head of the Department. With continuous global warming, the scientists expect the changing water cycle to become the critical factor for the variability in the global land carbon sink.