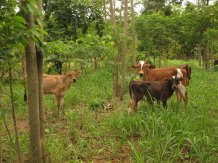 Amazon deforestation could be slowed by planting bean trees that would keep soils fertile and help smallholders make a living.

Rainforest soils are usually low in nutrients, so land cleared for cattle grazing is typically used for just a few years before being abandoned.

But a scheme led by the University of Exeter aims to use Inga trees – a diverse group from the legume family which take nitrogen from the air and lock it in the soil – to keep land fertile for the long term.

This could help to maintain tree cover in the rainforest in the part of Brazil known as the Amazonian Arc of Deforestation.

The plan is one of several Exeter projects boosted by a new £615,572 grant from UK Research and Innovation’s (UKRI) Global Challenges Research Fund (GCRF) – a £1.5 billion fund managed by the Department for Business, Energy and Industrial Strategy (BEIS).

“Inga trees can grow in very poor soil and are widely used in agroforestry and silvopastoral systems (where trees are grown among either crops or land grazed by animals),” said Professor Toby Pennington, of the University of Exeter.

“At present, deforested land is either used for a short time before being abandoned, or smallholders come under pressure to sell it for the large-scale, intensive production of soy beans – with much of the soy crop sold to feed livestock in Europe.

“Our project could help smallholders resist these pressures by making their land more sustainable and profitable.

“Land that has already been degraded and abandoned could be planted with Inga trees and used again by smallholders.”

Professor Pennington added: “We want to encourage alternatives to the large-scale agriculture marching on across the Amazon.

“Deforestation has many causes and this project is only part of the solution, but it’s an important step to prevent land being cleared, used and then abandoned.”

Inga seeds cannot be stored, so the project will establish four community orchards as future sources of seed, alongside 20 demonstration silvopastoral systems (cattle grazing on land planted with Inga trees).

“There are a lot of smallholders in this part of Brazil, and the Brazilian government pays a premium for milk produced in this way,” said Professor Pennington.

“This milk is then used in institutions, including schools, which care for low-income people.

“So as well as being better for the rainforest, this plan makes financial sense and can benefit poorer people in Brazil.”

Smallholders will be supported via a micro-credit system run by local NGO Instituto Ouro Verde (IOV), which will also raise awareness of the new grazing systems among 20,000 rural families.

IOV has demonstrated that smallholders can increase their incomes by 50% by adopting agroforestry and silvopastoral systems.

Inga trees grow quickly and produce pods containing beans covered in an edible pulp. The pulp can be used to flavour ice cream, so Ingas are sometimes called "ice-cream-bean" trees.

They are found across the humid tropics of Latin America.

The Amazonian Arc of Deforestation refers to the southern edge of the rainforest, situated mostly in northern Brazil.

The Exeter project has been funded as part of UKRI’s GCRF Innovation and Commercialisation Programme, developed to fast-track promising research findings into real-world solutions.