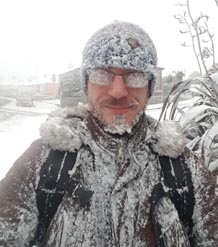 I attended my graduate studies in Marine Sciences with specialization in marine environment and marine living resources at Cadiz University in southwest Spain. During my last year I was awarded an ERASMUS scholarship, during a year I studied at Humboldt University (HU) in Berlin, Germany. The time at HU allowed me to develop professional contacts with researchers at Leibniz Institute for Freshwater Ecology and Inland Fisheries (IGB) which resulted in my appointment as a research officer working between 2009 and 2010 in several projects such as: the calibration methods between body protein and lipid content with a range of biometrical parameters.

In 2010 I enrolled Bangor University (BU) for my MSc. in Marine Biology, after graduating from BU, I worked between 2011 and 2012 as a research officer. My MSc. dissertation assessed the potential of two Antarctic mollusc species (Aequiyoldia eightsii, previously known as Yoldia eightsi, and Nacella concinna, Antarctic limpet) as sclerochronological proxies for shallow Antarctic coastal waters. The research developed during my MSc resulted in 2013 in a fully funded PhD project by Cardiff University (President’s Scholarship Awards). In 2017 I successfully defended my PhD thesis an also started working as a postdoctoral researcher at University of Exeter, Penryn Campus, in the international UK-Chile (NERC-CONICYT) joint project: Impacts of the Cryosphere on Benthic Ecosystems via Retreating Glaciers (ICEBERGS).

Please visit the blog from the project for regular updates and stunning pictures from the fieldwork cruises in the West Antarctic Peninsula (WAP). ICEBERGS is planned to run until 2020 with three fieldwork cruises on board of the RRS James Clark Ross visiting coastal fjords along the WAP.

Outside academia I am also a passionate landscape and nature photographer. I am especially enthusiast of astroscapes (combination of astrophotography and landscape photography). If you want you can visit my photoblog.

My research involves the use of Antarctic coastal mollusc bivalves as recorders of climate variability in the marine realm (Sclerochronology). I am interested in the relationships and feedbacks between the ecosystems and their physical environment and the wider climate systems.

Even though I was trained as a marine biologists, I enjoy working in multidisciplinary projects with a wide range of topics such as: climatology, biology, ecology, oceanography, glaciology, etc.